This past weekend our staff hosted the first ever HoopMIA Post Grad Bash. This tournament which consisted of two competitive fields was LOADED with college level talent. We truly appreciate the coaches who showed up to recruit and ones who have inquired about our scouting report from the event. Also we would like to thank the media outlets that were in attendance. Below our staff has comprised a list of Top Performers, Stock Risers, and Sleepers from the event. While this is not our scouting report these are the prospects who performed well and caught our eye.

Omeir was a monster over the weekend. In one contest he was a a perfect 14-14 from the field leading him to a stat line of 34 points and 16 rebounds. Mid-Major coaches should be all over Head Coach Art Alvarez trying to figure out how to land this monster.

Petar Krivokapic was stellar as well throughout the Post Grad Bash. He was most recently  offered by FIU which  should be the first of many mid-major offers that role in for Krivokapic as the post grad year continues. Over the course of the weekend he finished with multiple performances over 20 points. Krivokapic can really shoot it but posses a very high basketball IQ and underrated athleticism.

Dibwa the physically imposing center was a force over the weekend at HoopMIA Post Grad Bash. Dibwa posted multiple double-doubles while throwing down some thunderous dunks. Among the schools recruiting Dibwa, NJIT was the only school has offer that popped in to check on the 6'10 center. Dibwa continues to improve and should have a ton of college coaches chasing him in the spring.

Isaac the native of Atlanta, Georgia proved why division one are recruiting him. The 6'3 combo guard demonstrated his ability to knock down shots at a high level while also showing off his ability to initiate offense and make plays for others. In a game versus Potterhouse PG Isaac dropped 21 points & 7 assists knocking down an array of long range jump shots.

Alexandre the strong framed combo guard seems to be getting better by the day. Alexandre has a much improved basketball IQ and consistently demonstrated his ability to get teammates involved while scoring from all three levels. In a game against DME Black, Alexandre scored 23 points chipping in 7 rebounds. Alexandre has the ability to guard multiple positions due to his strong frame which has helped him garner offers from division one and division two programs.

Miller from Westlake Prep had a number of games over 20+ points and lead his team to the championship of the 786 bracket. Miller is extremely athletic and is always in attack mode. The combo guard has the ability to initiate offense but thrives as a scorer and loves to play in transition. As we approach the spring it would be SHOCKING if Miller wasn't on more coaches radars.

Edwards the Valparasio commit was sensational over the weekend. Edwards netted 105 points over 3 games while leading his team to the 305 bracket championship. Edwards is a big two- guard capable of getting hot in a hurry. Edwards should be someone that thrives at basketball program like Valparasio.

The 6'9 power forward from Australia was terrific in the HoopMIA Post Grad Bash posting a number of double-doubles. Willie has a great motor attempting to rebound the ball on both sides of the ball and soft hands to finish around the basket. Willie can also shoot the ball consistently out to 15 feet and seemed to improve every game.

Jackson was impressive throughout the weekend. The long, athletic forward ran the floor with ease and rebounded everything in his area and out. At times he missed some things around the rim that you could see was shocking to him at the time. Jackson is a prospect that looks like he can guard multiple positions and offensively give teams fits running the court hard and stretching the court out to the three point line.

Wilks was dynamite all last weekend at HoopMIA Post Grad Bash. Wilks has the ability and size to get to the paint and finish around the rim through contact. Wilks played both guard spots and made winning plays over and over again to get his squad to the championship game of the 786 bracket. Coaches in need of a quality guard make sure to contact Game Changers Academy

O'Hagen was dynamite from the perimeter. In the final contest O'Hagen unloaded 5 three point field goals and was a pest on the ball defensively. O'Hagen was clearly able to score from all three levels and made some high IQ plays throughout the course of the weekend in Miami. O'Hagen has fierce competitive spirit that college coaches should relish.

Santiago is a talented point guard who plays with a chip on his shoulder. Santiago is very quick and understands how to change speed and directions to blow by defenders and make plays at the rim for himself and other. Santiago is a developing three point shooter but is the definition of a pure point guard. His decision making skills and pesky defensive prowess helps him distinguish himself from guards with similar physical attributes.

Bigord is a talented wing with elite athleticism. Bigord demonstrated an ability to rebound way above the rim while also defending multiple positions due to his good foot speed and active motor. Bigord has the offensive tools to score from all three levels but thrives in catch and shoot. Look for Bigord to be a prospect coaches wake up on come spring time.

Salvi who was once committed to Howard University last year showed why coaches need to be recruiting this sniper harder. The lefty may not pass the eye test immediately but this young man is one of the best shooters in the state and proved it pouring in 25 points in the semi-finals helping propel his team to the 786 Bracket Championship. Salvi is improved as a ball handler and showed he is crafty enough to score on an island when he needs too.

Caoile was impressive during the HoopMIA Post Grad Bash, serving as secondary scorer for a talented TLAP roster. Caoile has a good frame and posses good decision making skills. Caoile is also a knock down perimeter shooter that can hot in a hurry. Caoile was a big reason TLAP made it all the way to the championship game in the 305 bracket.

Henry was a HUGE surprise. Henry is immensely talented and we discovered has only been playing basketball for a few years. The 6'5 guard is very bouncy with a strong frame and knack for getting to the basket. Henry has sound mechanics on his jump shot is someone that looks to have his basketball in front of him.

Suazo the wing-forward for Homestead Legacy was intriguing. While his body needs work Suazo has a good basketball IQ and can pass dribble and shoot it. Suazo is an ideal division 3 prospect and would be a guy that can impact that level greatly with the right direction.

Stephanos the Jupiter, Florida native was impressive over the weekend for DME Black . Stephanos consistently makes "winning plays" and found ways to score 20+ in multiple contests. Stephanos used his impressive college ready frame to score in transition and hustle baskets around the rim. Possibly his most impressive skill was his range out to the three point line. College coaches you have been awoken to this young man, go and put some eyes on him.

Bess a Miami native showed glimpses of his ability throughout the weekend. Miami Triple Threat sports a guard heavy line up but Bess was still able to make plays above the rim and display a sweet and confident perimeter jump shot. Bess must add some size to his frame and continue to improve to his skill set this spring but he will be a very welcome surprise for scholarship level programs that do their homework.

Asanov was quite impressive during the HoopMIA Post Grad Bash. The newcomer from Russia displayed a college ready frame with soft hands around the basket. While his athleticism is still developing Asanov runs the floor well and understands how to use his body defensively to change shots. Asanov is an intriguing prospect that all schools in need of size should reach out too.

Forbes a relatively unknown Swiss army knife for Game Changers Academy was huge in helping his team reach the championship of the first ever HoopMIA Post Grad Bash 786 Bracket. Forbes rebounded well and demonstrated his ability to defend multiple positions. 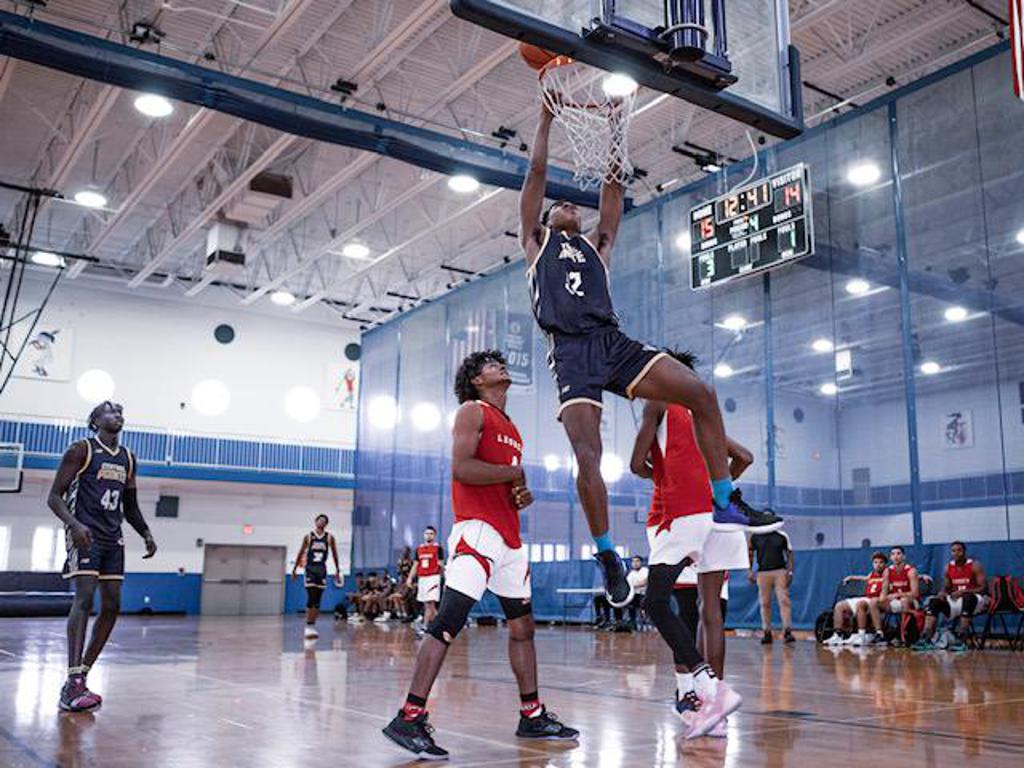